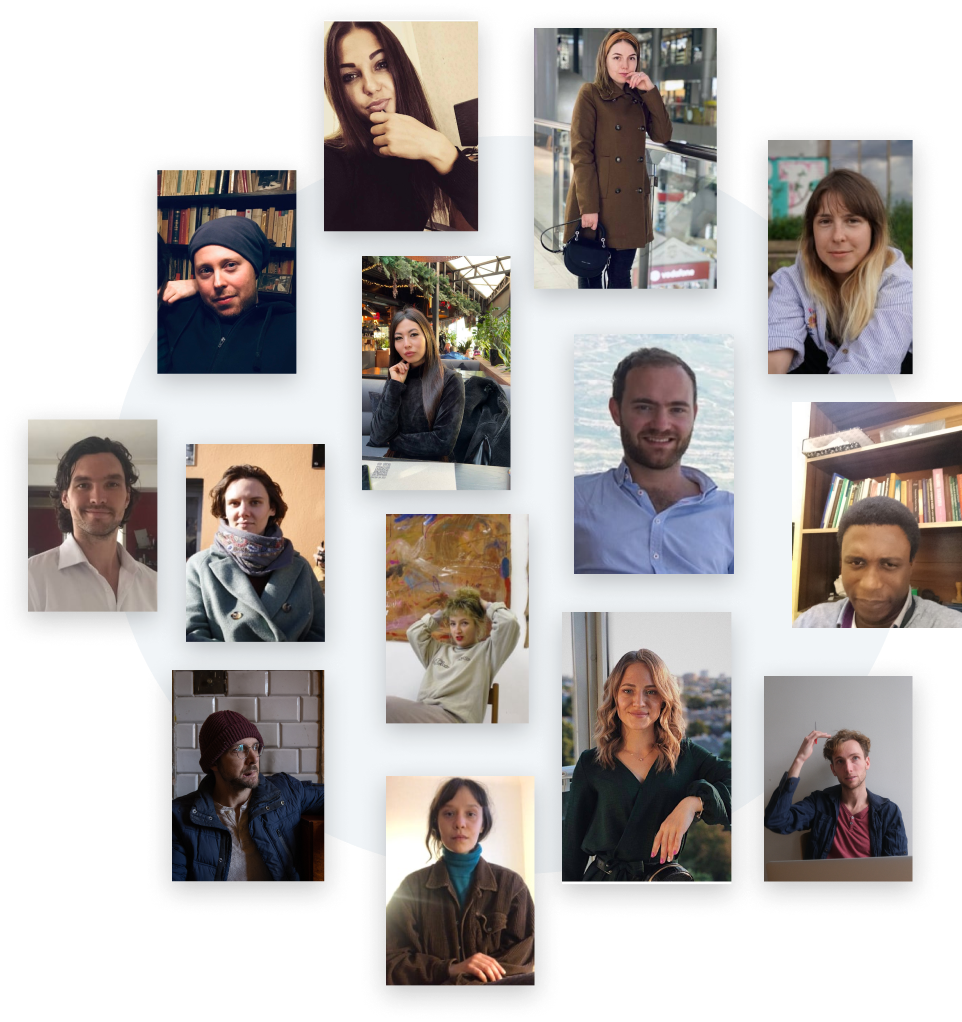 ‘FOR ODESSA’ is an NGO that has been supporting households of the very old, very poor or with many children since 2009. When war began, distribution of food packages in neighbourhoods became priority. DAU has been supporting them financially since around the same time to extend this program to those in need and dealing with urgent cases.

Hello, my name is Maryam, I am a psychologist and I have been volunteering at the Charitable Organisation “Sa Odessu” for 12 years. Before the war, I was responsible for purchasing, accounting and coordinating the work in the office. I have always tried to bring positivity and a smile to our team. I organized various large events, such as entertainment events for children, events for the elderly or for veterans of the Second World War, festivals and New Year's fairs. Today I give answers to all questions of people who need help, I am also responsible for purchases and for donation reports.

Hello, my name is Julja and I have been volunteering at the Charitable Organisation “Sa Odessu” for 5 years. Before the war, I was responsible for welcoming people and taking calls from people who need help. I managed the project "Congratulations" in which we congratulated the citizens of Odessa on anniversaries and important holidays. Today I take care of purchases, phone calls, route descriptions and the delivery of aid to people.

Hello, my name is Olja and I have been volunteering at the Charitable Organisation “Sa Odessu” for 3 years. Before the war, I was responsible for welcoming people and taking calls from those in need of help. I also took care of applications, documents and the accounting for the aid provided. Today I am responsible for purchases, phone calls and the delivery of aid to people.

Hello, my name is Nastja and I have been volunteering at the Charitable Organisation “Sa Odessu” for 6 years. Before the war, I was on maternity leave due to the birth of my wonderful child who is now 7 months old. Today I take care of phone calls. I speak to people who are in a difficult material situation; some were laid off, some had to flee here from another city with nothing. I note their needs and try to be a spark of hope to them.

Teams that are directly connected to the communities they are helping are able to respond better than anybody. This helps us provide a bridge to help the most vulnerable and least visible in their moment of need.

Lenny was seriously injured in Iraq as a teenager after joining the US Marines several months before 9/11. The right half of his jaw was blown off, accompanied by various other shrapnel wounds. The subsequent pension he gets from the US government has allowed him to devote his time to community support and volunteer work. When the war started he traveled to Odesa, Ukraine to act as a photographer for aid organizations.

Our team outside Ukraine

Our team is a private initiative of people with a connection to Ukraine. DAU began in the first days of the war with a flood of private calls from outside Ukraine asking how to help and a flood of desperate calls from within. To connect the two was natural - from there we expanded to include a volunteer network and quickly organised as we realised we could work together to address the tragedy of a place we all love.
We have a background in humanitarian aid and an informed understanding of what is happening on the ground in Ukraine. We are all volunteers and spend no money on administration. Our goal is direct, sustainable and transparent aid, led by the needs of those who need it most.

Anna grew up in a Russian-speaking family in Germany. She finished medical school last year and is now on her path to become a Gynecologist/ Obstetrician. Together with internationally based doctors, she currently volunteers by offering medical aid via video-call to Ukrainians. Back in 2018, she stayed in Odessa for an internship at the University Clinic of Odessa. She still has ties to the people and medical personnel she met back then. At Direct Aid Ukraine, Anna helps in the daily running of operations, communications and acts as a medical advisor.

Michael first travelled to Ukraine in 2010 with Pearl and other friends. Since then he has returned on a regular basis. With a Masters in Human Rights from the London School of Economics and Political Science he is focusing a significant amount of his freelance design work on humanitarian projects. He has worked as UX and Webdesigner for the last 4 years. Seeing Ukraine being torn apart by war is painful for him to see. By supporting DAU with designing and building its website he is hoping to increase the donations that are supporting the most vulnerable people of this war.

Teresa Eichler is an artist and designer living in Vienna. In her work she deals with political and social aspects. At DAU she helps with design and it is a great concern for her to contribute to help the people in need in ukraine.

Marie is a musician and currently supports herself and her music as a professional assistant for people with disabilities, enabling them to lead dignified, self-determined lives. She provides psycho-social support, assistance in daily life as well as daily physical care and nursing. She is politically active in environmental and social justice, as well as in Berlin-based grass roots initiatives that promote positive integration and provide support for marginalized refugees. Marie uses her free time to volunteer in the social media team for Direct Aid Ukraine.

Oliver’s childhood experiences were spread between the 3 different cultures of England, Germany and Ukraine. It is in Odessa where he had the most formative and he maintains some of his oldest friendships there. Oliver is currently based in Taiwan and works as a copywriter. His professional background is in the business and startup world and his focus in DAU is on increasing it’s capacity to help more people.

Olayimika Oyebanji is a web 3 consultant and an award winning writer. He's a core contributor to Ukraine DAO and a contributing writer at Hackernoon. He's passionate about helping the Ukranian people and has recently joined the media and publicity arm of  Direct Aid Ukraine (DAU).

Philipp holds degrees in History and Politics and Russian and East European Studies from the University of Oxford. He has worked in management consulting and the start-up industry. Currently, he is finishing his Ph.D. in EU financial and fiscal politics at the University of Antwerp and is working as a freelance journalist. He is fluent in Russian and was previously based in Moscow, where he worked for media outlets such as The Moscow Times. For his project Faces oft he East a collection of portraits and stories, he has regularly travelled to Ukraine and other countries in the post-Soviet space. He is co-running ostblog.org, a photojournalism website focusing on Eastern Europe and former Soviet countries.

Matt grew up in Germany in a Russian-speaking family. He is a sound engineer who has worked in developmental aid projects in Germany and in the Palestinian city of Jenine. He has a range of experience in administration for cultural and developmental aid projects.  As a paramedic, he has many years experience volunteering for the German Red Cross as well as other local community aid organisations. He has travelled extensively in Ukraine and Russia for work as well as privately. The current situation in Ukraine motivates him to support DAU by managing finances and documentation and administrative issues.

We make sure that your whole donation reaches it's destination as quickly as possible, so it can be most effective in helping those who need it most. 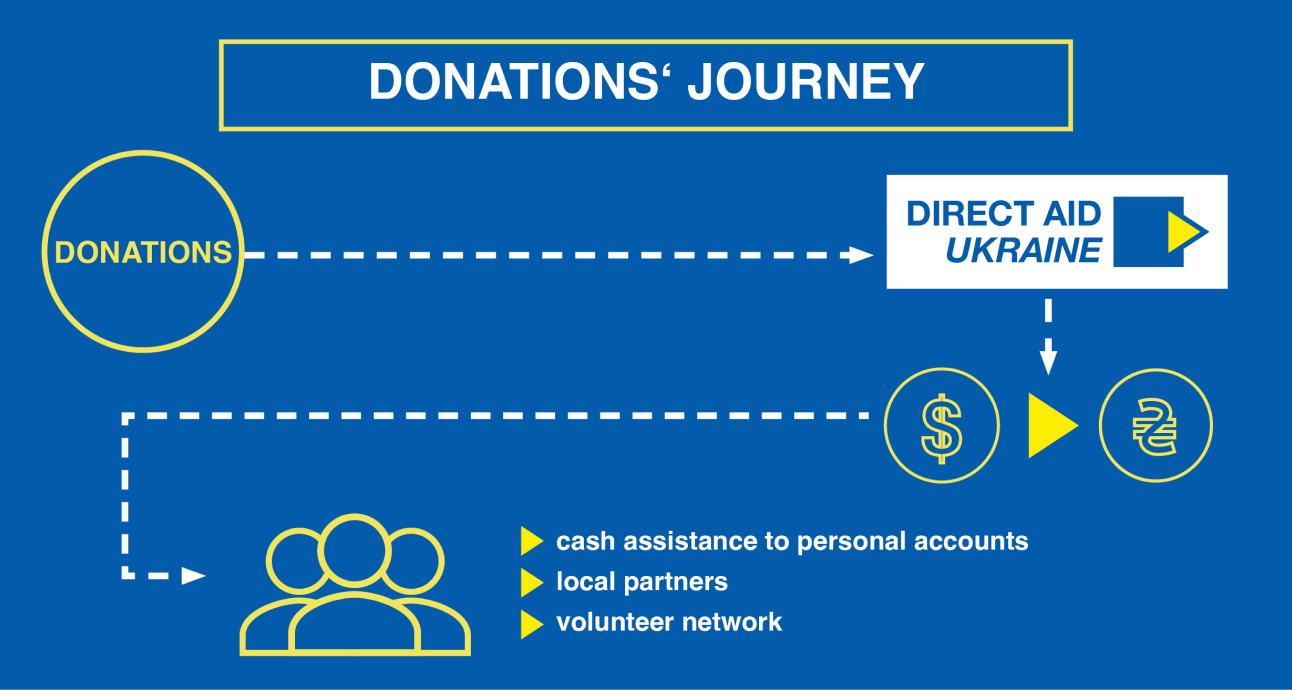 Help us with your donation. 7 EUR can support a small family  for two weeks or a single person for a month in an emergency. 17 EUR can help a big family. DAU has various types of aid  we distribute through our partner organisations and volunteers. We rely on community supportto prioritise and address the most urgent need. Non violence, transparent and accountable with minimal bureaucracy and volunteer run.

So far we are still setting up our non profit status. That's why we still have to collect money through our private bank accounts.
Other payment optionsDonate with PayPal